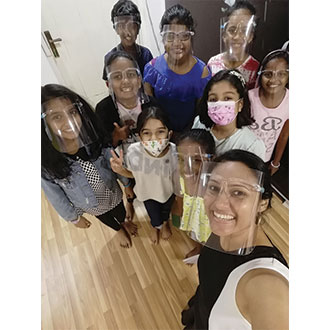 When you think of theater productions or speech and drama classes, we in Sri Lanka normally give these practices a very narrow scope. Theater productions are mostly seen as an entertainment industry and when you say Speech and Drama, we associate this with an elocution class.

However, some Drama educators in Sri Lanka are working tirelessly to redefine these boundaries and push the performing arts to new and ever greater heights. One such person is Ranga Jayaratne She is the Founder of Cue School of Drama and the Founder and Artistic Director for Cue theater co.

The Director, the Teacher and the Ever-Helpful Big Sister 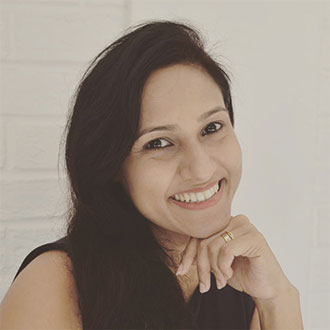 With a profound love for the performing arts, especially theatrical productions and performances, Ranga has always pushed forward in pursuit of this passion. Having obtained a Licentiate in Teaching Speech and Drama from Trinity College of Speech and Drama UK, she launched her very own school for speech and drama to help visualize her dream for what this form of education should fully entail.

She hit the ground running, as she started her teaching career at the age of 17 while still doing her Advance Level studies. Moving forward from here, she started directing small children’s plays for her students in 2003. From here, she has tried to have a theatrical production at least once a year or every other year. Ranga’s first big theatrical production was the “Tale of a Man and a Monster” back in 2012, a reenactment of the classic “Hunchback of Notre Dame”. This was the first play where the cast was not solely from her Speech and Drama classes, but where anyone could audition for a role in the play. Of course, these successes are not without their challenges.

Despite these, Ranga’s drama productions and her classes have only grown in strength. Two decades of teaching and theatre directing experience was her inspiration to launched the “Cue School of Drama” in 2020, fully investing in her passion for teaching this performing art.

The Significance of the Cue Drama School 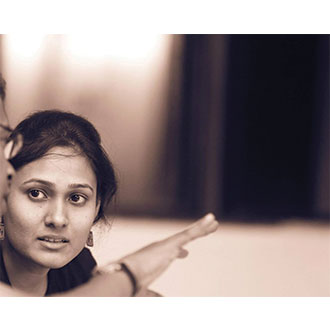 To Ranga, teaching speech and drama has always been so much more than a mere elocution class. Her goal is to help the students under her wings, grow their personalities and their skills so that everything they learn in the class and on the stage can be applied to any professional and personal walk of life.

When you walk into her class, you know immediately that this is not your typical classroom. There are no desks and chairs for the students or the teacher. All sit together on the floor as one family. In addition, a student’s growth and development is not assessed through the pursuit of exams or certifications but through performances.

Furthermore, Ranga gauges her success not by any financial gains or popularity but based on the success of her students in their varying professions and their personal growth. Nothing brings her more joy than watching her young students grow with her from someone who was once timid and shy to someone who is outspoken and confident, not just on the stage but also in life.

She also highlighted the importance of her drama and speech classes these days as children now are mostly watching TV or playing on smart devices rather than playing outside. Because of this, she pointed to how engaging a child in a drama class will not only help in developing their speech, but it will also help develop that child’s creativity and social skills which parents often complain as being lacking. 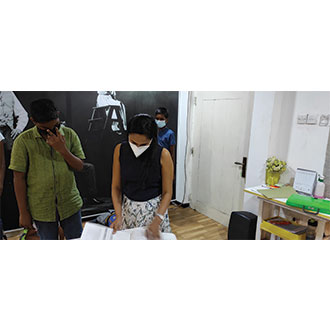 Another of Ranga’s key objectives of her classes is to create a safe and receptive environment in order to help her students better express their emotions and feelings with confidence. She also tries, as much as possible, to look into the needs of each of her students so that the learning experience is best curated for their individual capabilities and skills. This way, the student has the best possible experience, and no one is left behind.

The Cue School of Drama

Ranga’s theater school is open to anyone between the ages of 3 to 19. Based on their age, her students are put into one of 7 stages where they will be with others of a similar age group. At the Cue School of Drama, Ranga’s approach to teaching speech and drama is mostly based on “EduDrama” teaching methods. This is a new and popular approach that incorporates “Education through Drama”. Here students are taught confidence, personality skills, teamwork and leadership through stage drama. This approach also gives the student a voice and encourages the students to be a part of their education process by giving in their own ideas. 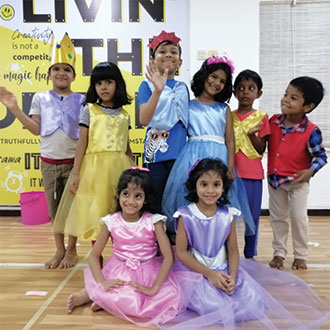 In these classes, children not only learn the art of drama but through this medium explore many social and cultural values and look into stories with diverse moral significances. Students also learn to grow their creative skills as they build their own stories and scripts and by building and creating their own stage props and costumes. 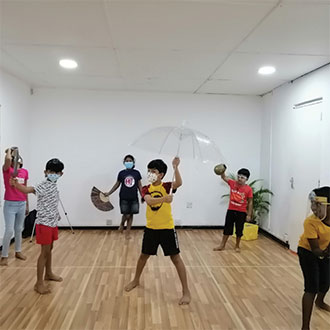 Parents are also invited to sit in and watch some of the children’s activities, so that they too can have a better understanding and appreciation for the challenges that their children are overcoming through these classes. 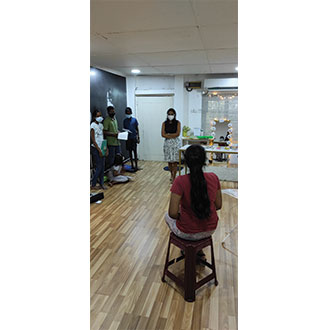 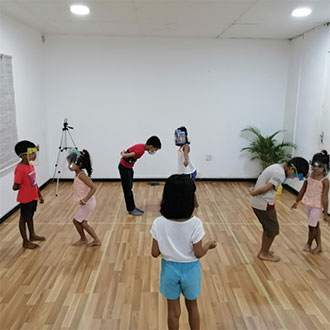 Of course, as there are no exam-based gradings, students do a monthly performance and are assessed based on these performances. This helps to keep the focus of the class broader, rather than to focus only on passing exams. Having said this, Ranga does push her students to take part in many local and international competitions so that they can have a healthy level of competitiveness and gauge their skills on a global platform. 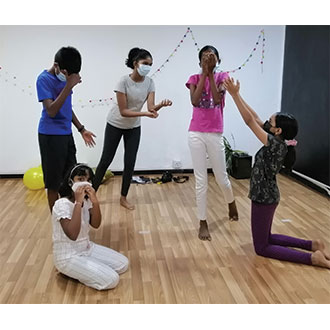 At these classes, Ranga also provides her students an opportunity to learn from some leading international teachers and learn with other drama school students from around the world. Ranga has collaborated with teachers and students in Manchester, Cardiff, Kilkenny - London, Norwich Milwaukee and Pakistan and has even had a professional Broadway performer come and work with her students. 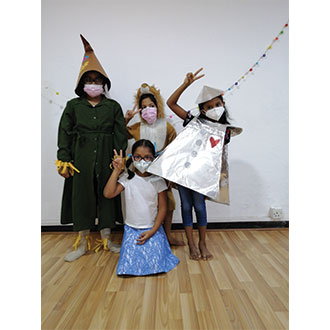 Her students’ success came to light last year as several of them took part in the “World Monologue Games”. At this event 7 of her students entered into the regional while Nishelle Fernando and Githmi Jayaratne made it through to the Global finals. Of the 2, young Githmi (10 years) ranked 6th overall. This was the highest any Sri Lankan has ever placed at this competition, as she faced off against other children from countries like USA and UK, with professional acting backgrounds. 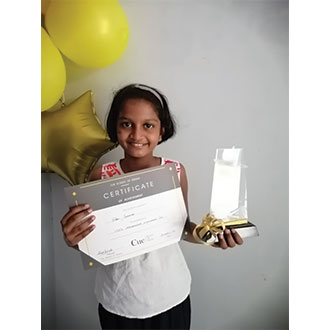 Ranga spoke about Githmi, saying how when she first started had been a shy and quiet girl who now is more confident than ever before and is always eager to step up and take initiatives. 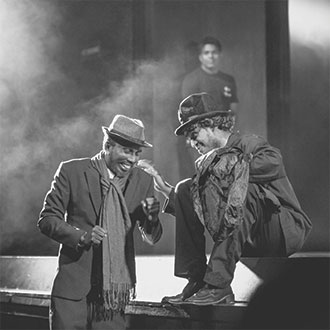 Cue Theater Co. is Ranga’s theater production company which is closely associated with her drama school. It was through this theater company that Ranga has launched her productions such as “The Tale of a Man and a Monster”, “The Count of Monte Cristo”, “Our Town”, “Eurydice” and “The Woman in Black”, to name a few. 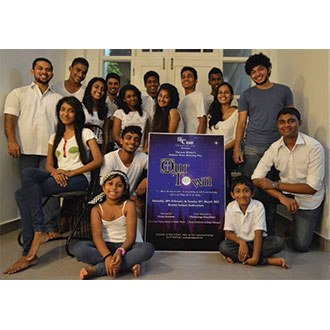 Of course, the main notable exception to this theater production company is that Ranga does not operate this as a for-profit venture. Herself and the actors involved in these plays are not paid and perform only for the love of the stage and their craft.

Ranga also explained another motivation for having Cue Theater Co. She explained how this enabled her students to be in a class that is affiliated to a theater company. This way, after learning in a class, her students are able to take their lessons onto the stage in order to fine tune these skills and really drive them home.

Ranga also spoke fondly of her past students, saying how those that were able to take part in theater productions were often the students that stayed on with her the longest and who truly gained the most from her classes. 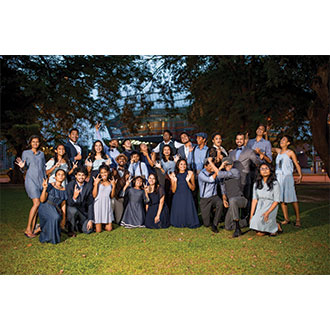 This theater company also gives her students an opportunity to work alongside many other child and adult actors as the Cue Theater Co. welcomes anyone with a passion to perform regardless of their past experience in theatre, to come audition and take part in productions.

Joining up With Ranga and Cue

So if you would like to be a part of this world of theater and drama, or want to get your child involved, you can visit the Cue Theater website at https://cuetheatre.co/, their Facebook pages @Cue-School-of-Drama or @cue.stage or their Instagram pages @cueschoolofdrama or @cuetheatre.co to see more information about who they are and what they do. You can also call them up on (+94) 77 90 9 3744 or email them at info@cuetheatre.co.

It is not only about learning, but also about growing and building upon who you are and who you can grow up to be. 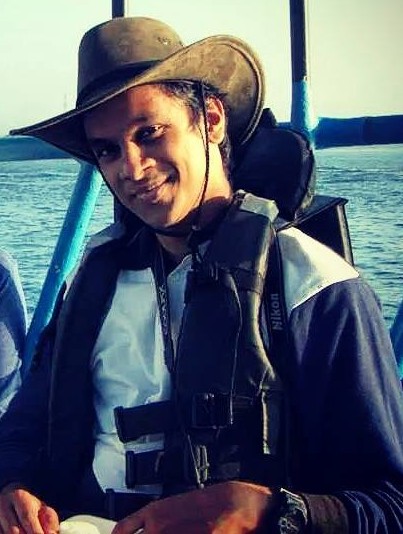 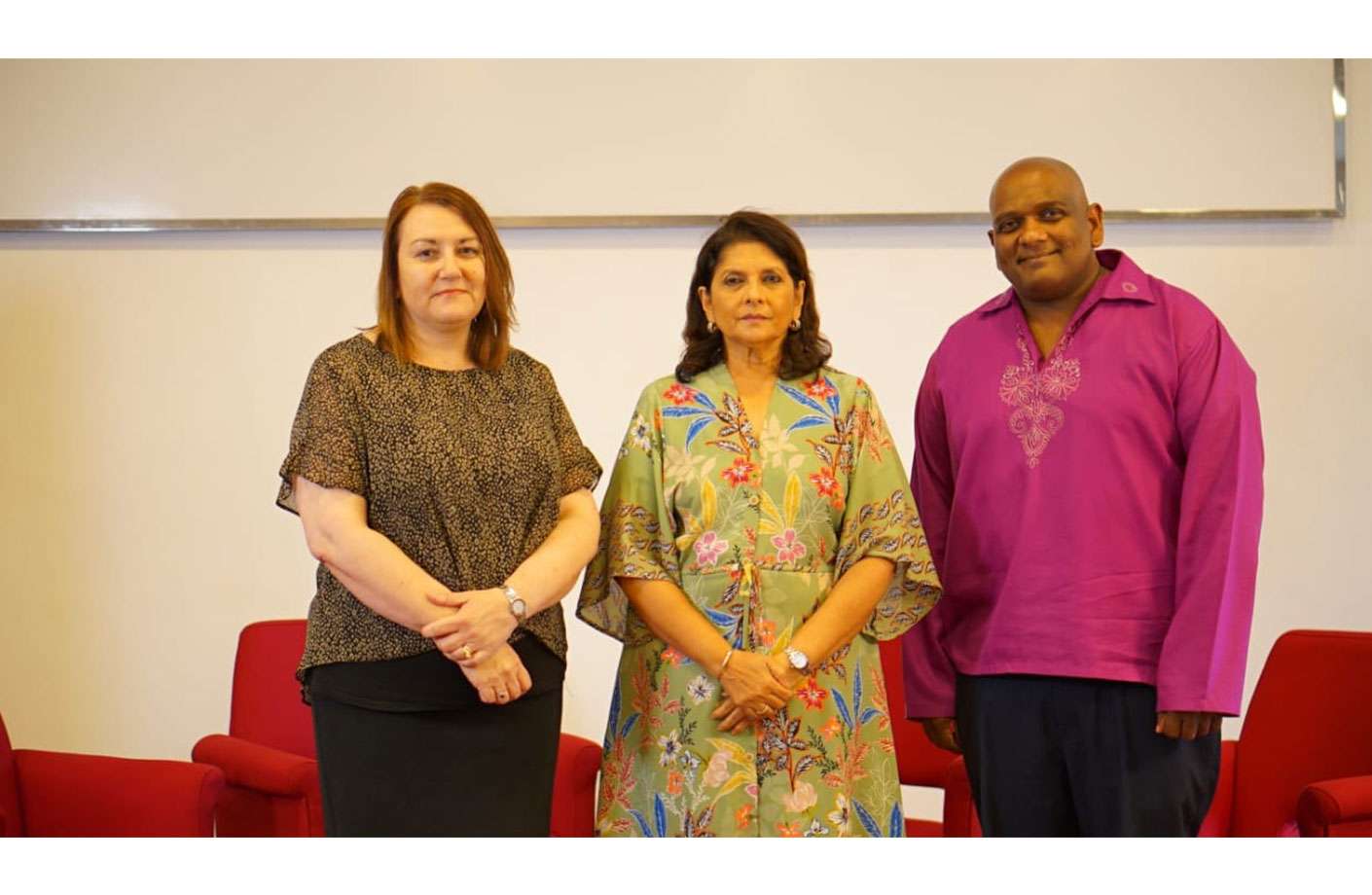 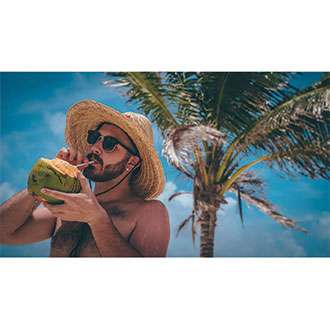 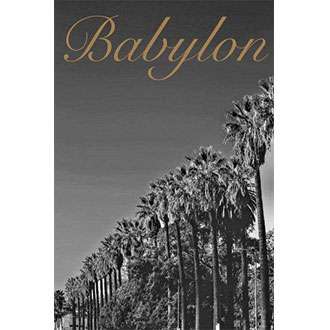 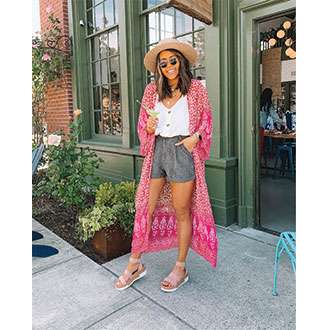 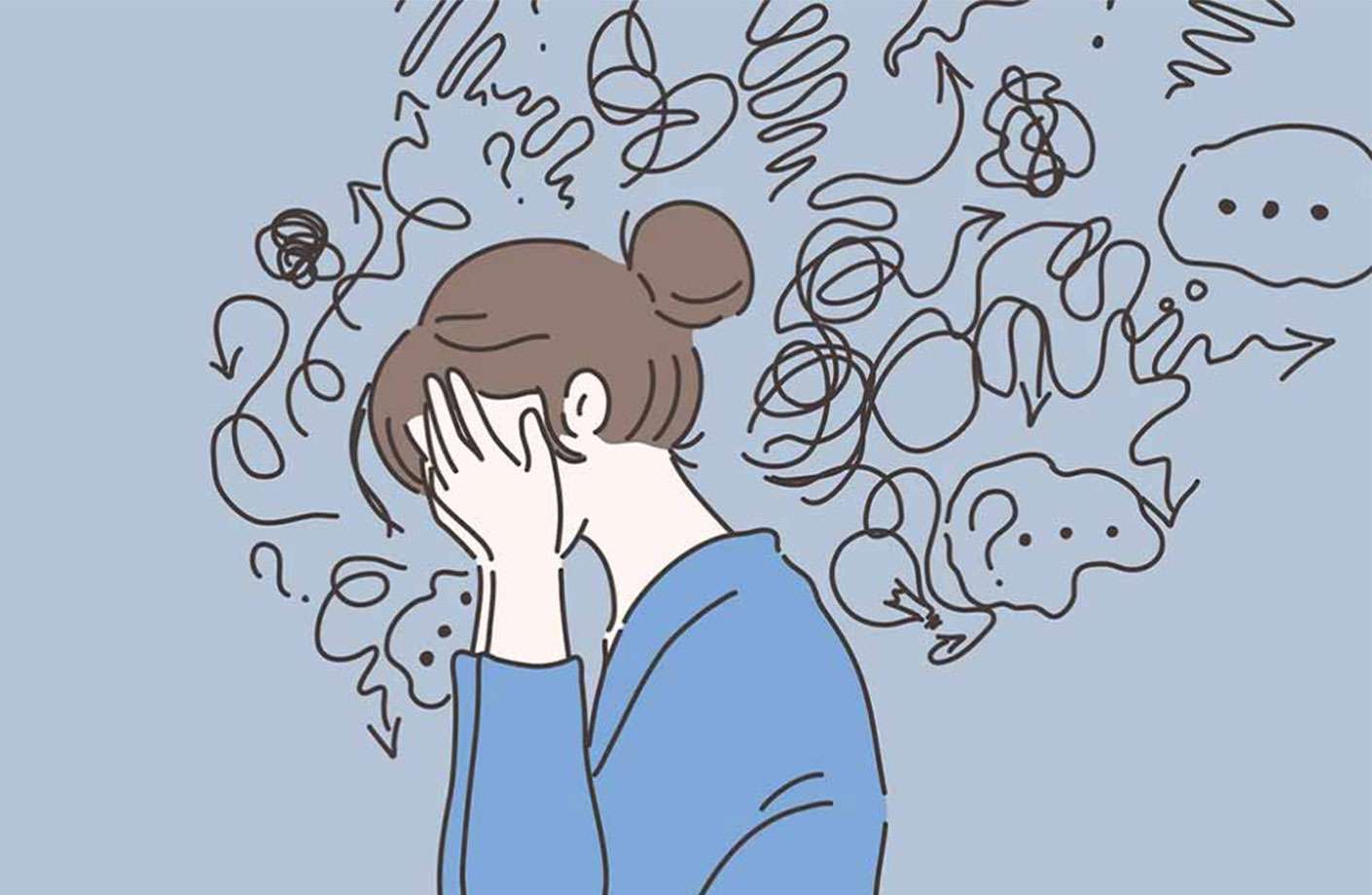 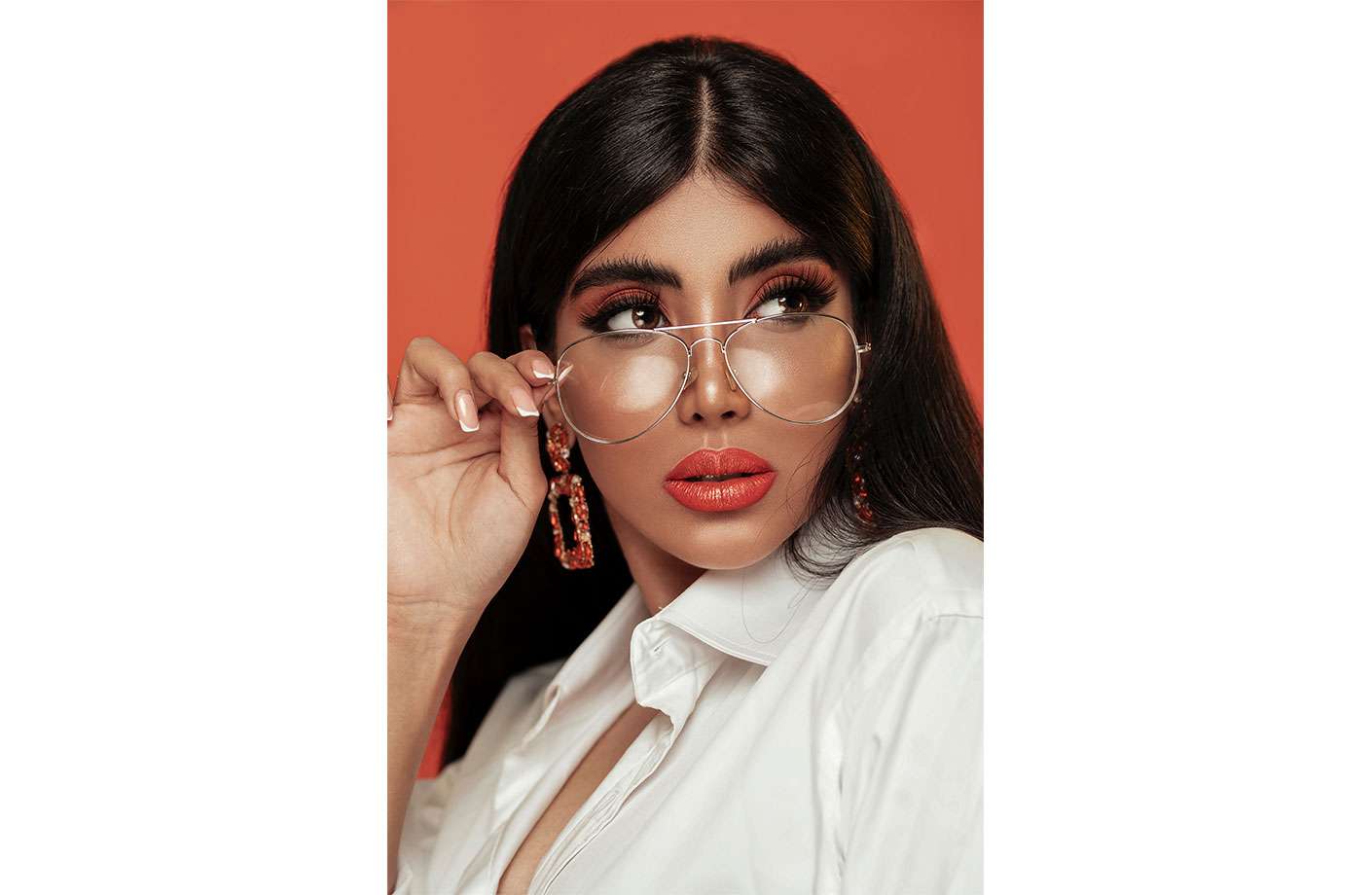 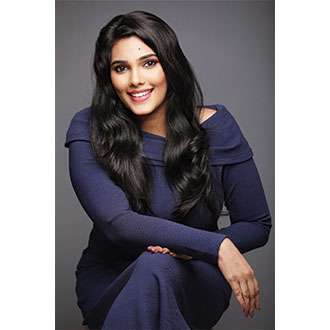